Small hospitals, the bystander effect and a hospital that works well 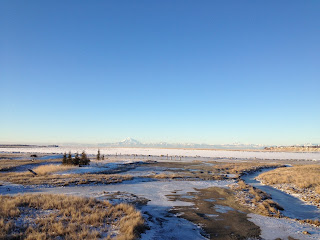 I just finished another week of hospitalist shifts at a small hospital in Alaska. It was a good week. People worked well together, the patients were well served and seemed to feel good about their care and, since I had been at this hospital for several weeks, I noticed some of the things that really worked.

The hospital is a member of the "Planetree Alliance" which works with member hospitals to make them more sensitive to how patients experience things, and also works to increase efficiency so energy and money can be directed in the right way. I read some things about this group. Apparently it was started by a woman after she had a terrible dehumanizing hospital experience and now started an organization to make hospitals less unpleasant. In some places it works, and in others it does not. It sounds like that has to do with whether the nurses are genuinely overextended. Planetree hospitals look better, with fish tanks and waterfalls and nice lounges, and have services like massage and therapeutic touch. Staff members do retreats to help them learn about what patients experience and to absorb the new care model. Some nurses have expressed that they feel like scripted automatons and couldn't possibly be expected to take care of really sick people and also act like day spa hostesses. In my hospital they seemed to be doing fine, and, because it's Alaska, they probably chucked the script but kept the waterfalls and the general attitude.

What I noticed about this hospital is that the doctors work well together (generally) and the nurses take initiative to make sure patients get the care they need. I usually find at least one nurse when I work at a hospital who says something or does something that reveals a deep misunderstanding of human physiology and makes me really nervous to leave a patient in his or her care. The nurses were all good and they acted like members of a team that took care of patients rather than being disgruntled or subservient. This can only come from not having been yelled at by physicians for asking about treatment choices or lab results. The nurses were always busy, but did not seem terribly harried, which bespeaks adequate staffing ratios.

Every morning Monday through Friday I would sit down, as hospitalist, with the social workers, physical therapists, nutritionists and nurse discharge planners and discuss all of my patients and what we needed to achieve success. Because it was a small hospital in a small town usually somebody at the table knew more about the patient than I did in ways that would explain how the patient came to be so sick and what hurdles they had to jump over in order to get home. They might tell me that the husband had been abusive or that the caregiver was actually a schizophrenic daughter or that the patient had huge financial resources which opened up many new options. They might know that less than civil behavior was the norm for this patient. They might have stories of how the patient almost died a few years ago and that it is amazing that they are independent and working now. Since there were lots of Alaskan Native patients people who had lived there for years would explain to me how their families and culture affected things. Since it was a small hospital we could talk about all of my patients every day and someone would volunteer to take care of details like obtaining expensive medications or contacting caregivers so that I could take care of medical problems and not get overwhelmed (very often).

Nurses also had these Vocera walkie talkie things so I didn't have to go wandering all over the ward to talk to them, which made me much more likely to be able to come up with a plan that both of us
understood.

The fact that this hospital was small was very important in making it good. Small hospitals get a bad rap when it comes to taking care of certain life threatening emergencies. If you have an acute heart attack and need to get an artery opened up pronto to save your life, you want to be right next door to a major metropolitan hospital. Our emergency department flies such patients to the nearest major hospital, which can be achieved in less than an hour, weather permitting. The patients who stay, though, get care from a set of doctors who usually know each other well, are used to working together and are right there when you need them. Since there are a limited number of specialists available, patients don't usually have a large and unwieldy entourage of physicians confusing the nurses and pharmacists with conflicting orders. It would be nice to have all of those endocrinologists, oncologists, rheumatologists, cardiologists and vascular surgeons (to name a few) available, but for that loss, something is gained in consistency and familiarity. The coordinating hospitalist has to actually think rather than call a specialist for each offending organ, which is good.

I read an article in the New England Journal of Medicine about the "bystander effect" in medical care in a large university medical center. The bystander effect was coined after a much publicized rape/murder in New York City during which none of a number of people intervened to save a young woman. Psychological studies have investigated what variables make us unable to do the right thing when faced with an event that clearly needs action. Social norms that work in other situations sometimes make us stupid. We assume, in a large group, that someone else is more qualified to act than we are. We pay less attention in places where we are overstimulated. It's inexcusable, but occasionally Chinese toddlers run into traffic unheeded and the injured or ill lie in public, unattended. The author of the article was a specialist helping care for a person in the intensive care unit of a major hospital and noticed that the patient was getting sicker and sicker with nobody out of scores of doctors taking responsibility for making important decisions until the patient nearly died. He noted that bystander effect researchers have found that when the bystanders are friends, they are more likely to take action. He suggested that fostering friendship among doctors in a setting like that would be good for patient care. I agree, and would add that there might be other good reasons to be friends as well. In my little Alaska hospital I noticed the opposite of a bystander effect. Everyone seemed to have an opinion and told me about it. All of the patients seemed to be being stealthily watched by multiple caregivers all the time. It was very nice.

Another thing I noticed about this hospital was that the doctors were really good. A couple of the internists were the former chief residents of their well respected training programs. A young anesthesiologist had trained at Harvard and the Mayo Clinic. People were still psyched to take care of patients. I'm not sure how this happened, but I think that a couple of decades ago some good doctors fell in love with the area and decided that they would make it medically excellent. They called their friends and their friends moved there and they trained medical students and medical residents and kept up their enthusiasm for teaching and learning. I think that's what happened. There might be some other factors involved. I'm not entirely sure of the ingredients or how the recipe was put together but the final product is excellent.