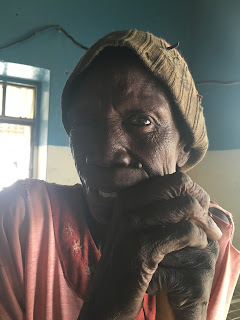 I just got back from a couple of weeks in Old Fangak, a community of people living by the Zaraf River in South Sudan. It's normally a small community, with an open market and people who live by raising cows, trading on the river, fishing and gardening. Now there are tens of thousands of people there, still displaced from their homes by the civil war which has gone on intermittently for decades. There are even more people now than there were last year.

There is a hospital in Old Fangak, which is run by Jill Seaman, one of the founders of Sudan Medical relief and a fierce advocate for treatment of various horrible and neglected tropical diseases, along with some very skilled and committed local clinical officers and nurses and a contingent of doctors, nurses and support staff from Medecins Sans Frontieres (Doctors Without Borders, also known as MSF) who have been helping out for a little over a year. The hospital attempts to do a lot with a little, and treats all who present there with whatever is available to combat their myriad ills. There are special programs for children with severe acute malnutrition, for patients with tuberculosis, kidney disease, Kala Azar, including food distribution for a subset of people with chronic illnesses.

I've been to Old Fangak 3 times now, always in the winter (warms my toes for a few weeks) during their dry/cool season. Cool means that it doesn't get much above 100 degrees during the day and cools down to sometimes below 70 at night. My stated purpose in going is to teach Jill and anyone else who wants to learn how to do bedside ultrasound. I love teaching people to do ultrasound and it means that a 2 week trip can actually have some long lasting benefits. I also get to be a general all purpose doctor who can give shots to babies, sew up lacerations, trim down leprous calluses, ponder the etiology of obscure illnesses and cook dinner. I get to see how the staff at the hospital manages to do the loaves and fishes trick with far too many diversely sick people and far too few resources.

They have a work horse of a Sonosite MicroMaxx ultrasound machine which is good for anything from babies to hearts to fractures and abscesses. I got to teach a midwife who has seen other people use ultrasound but hasn't been able to do it herself, an ER doctor who had only previously learned to do ultrasound to identify blood in the abdomen in patients with blunt trauma and a nurse who will likely make international medicine her career and was an awesomely quick study. Jill was already quite good with obstetrical ultrasound but became more confident with hearts and abdomens. Everyone learned how to make gel with glucomannan powder for when the carefully hoarded real ultrasound gel goes mysteriously missing. I brought my Vscan (little pocket ultrasound) for ultrasounding on the fly, and that was really useful as well.

An ultrasound machine paired with a person who can use it makes a big difference to care in the US, but is life-alteringly amazing in a rural hospital in Africa. What, you might ask, was it good for?


So bedside ultrasound clearly rocks. Living in South Sudan and being sick does not.

Anonymous said…
This was an interesting article Dr. Boughton. Wanted to let you know that we wrote a blog post inspired by your article, with links of course. You can find it here if you're interested: http://clarius.me/resource-constrained-ultrasound/
April 5, 2016 at 12:00 PM

Unknown said…
Awesome and inspiring article. I am a neurosurgeon and went to the Philippines with Operation Smile in 1999. Probably the most rewarding 11 days of my 26 years in medicine. I would love to return to something like that. Articles like this spur me on.
April 11, 2016 at 10:38 AM