On not moving and other dangerous sports 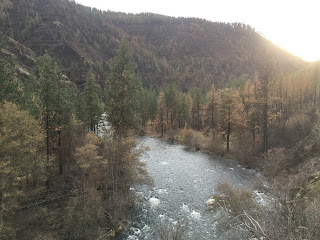 I finally finished reading the many journals piled up on my dining room table, which have been shunted to other flat surfaces for projects or the visits of friends. I didn't read them all well, but I touched them all and read what interested me.

The early October edition of the Annals of Internal Medicine particularly caught my eye. There were two major articles that looked at determinants of health in a slightly different way.

The first used data from the Cleveland Clinic's electronic medical record to see whether the standard prediction calculator that we use to estimate a person's risk for cardiovascular disease works as well in poor as in not-poor neighborhoods. They found that it did not work nearly as well in poor neighborhoods. In fact, whether you have a heart attack or stroke is more determined by whether you live in a poor area of town than whether you have the traditional collection of risk factors for heart disease such as high blood pressure, smoking, diabetes and high cholesterol.

The second took data from a large and ongoing study looking at disparities in stroke incidence based on race and region. They used accelerometers to see what patterns of exercise and lack of exercise were associated with health, specifically heart attacks and strokes and death from these. As one would imagine, being more active is better than being less active. The average person in the study (all of whom were meant to represent average Americans) was sedentary for over 12 hours of a 16 waking hour day, sitting or lying around for over 77% of the time. But it didn't just matter how many hours a person was active in a day, but also how they broke up their sedentary time. It was best to be less sedentary, but if you were more sedentary it was best if you got up and moved around a bit every 10 minutes or so. The people who were less active and had longer bouts of inactivity were 5 times more likely to be dead at the end of 5 years than the people who were more active and had shorter bouts of inactivity. For the active people, it didn't matter that much if they had long episodes of inactivity, but for the inactive ones, it really mattered.

It is tempting to say that poverty and inactivity do not cause ill health, it is ill health that causes poverty and inactivity, but the authors did a pretty good job correcting for this. There may be other factors at work, and I'm sure there are, but it does appear that it is good to walk and move around frequently, even if briefly. It is also true that a person's health suffers in measurable ways when he or she is ground down by poverty. These studies highlight, once again, that efforts put in to making it easier to be healthy by improving the way people live may have benefits much greater than putting a similar amount of money or resources into providing healthcare once a person has already become sick.

furrydoc said…
Doctors and teachers end up being part time social workers, political activists, sometimes windmill tilters, or amateur psychologists juggled amid what we are trained to do. The Endocrine Society designated as the theme of one of its meetings about 5 years ago the Health Outcome Disparities. In true Society fashion, they pretty much ignored the clinicians who struggle with this population if favor of those who run clinical trials and have trouble recruiting these types of patients for their drug testing.

I would be a little skeptical of data extracted from electronic records, though. The ones I read too often border on fictional accounts of patients.
January 29, 2018 at 6:58 AM

bdur said…
Janice, I have read all of your posts, some twice. If you ever stop blogging, a large part of my life that informs me, makes me think (deeply) and keeps me thinking straight will disappear. You are the epitome of "common sense" in science and medicine.
Strangely, I have tried without success to introduce you to my doctor and other health professionals. I expect what you have to teach is very scary to (almost all) health professionals because many fear that what they've done their entire careers may be seriously flawed. And like gerbils on a wheel, they can't or won't take the time to stop and re-examine if they are getting anywhere at all.
And I like your singing. And no one makes a compote at singing camp like you do!
Please tell me if you do not want to spread the word (like to my facebook friends) that your blog is eminently worth their time.